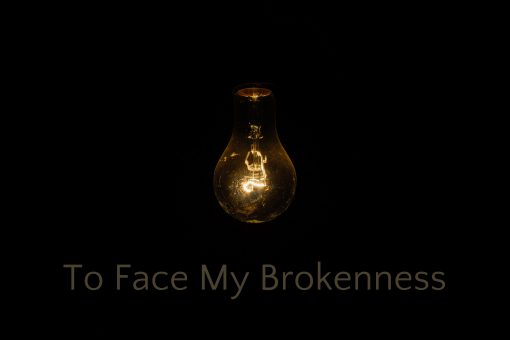 How are you doing today?

I’m here with a little poem I wrote a few weeks back.

I’d love for you to take a look!

To Face My Brokenness

I once tried to face my brokenness head-on.

I saw for the first time the roiling turmoil I had hidden so well.

The depths of its concealment made me cold with fear.

I saw rebellion lurking in the shadows.

I found seething doubts I did not know about.

I tried to face my brokenness head-on.

I turned and fled instead.

The reality of my wickedness sank in.

I wanted to fight it.

I wanted to make it flee, instead of me.

I apprehended what I had not grasped before.

By ignoring my brokenness, I had thought I was self-ruling.

But all the while, the morbid evil was chaining me.

While I believed the lie that on my own I was free, sin was making me its slave.

My plight was now apparent.

I was chained to the very wickedness inside me.

I was subjugated by my own human nature.

I was irate at this evil and desperate for help.

I cried out to God in my pain.

He saw my brokenness, saw the poison in my heart.

He knew my bleak and twisted thoughts.

He had watched my corruptness and greed.

He had seen all of the filthy things I had done.

He had heard the contemptible things I said and thought and felt.

The base acts I had committed.

He had viewed my darkest thoughts and seen the wickedness I had tried to veil.

What hope did I have?

He had seen every wretched, unlovable thing I had ever done.

Yes, God knew what I had done.

Yet He loved me anyway.

And He vanquished it.

Until next time,
Ellie

What do you think of “To Face My Brokenness?”

8 thoughts on “To Face My Brokenness”