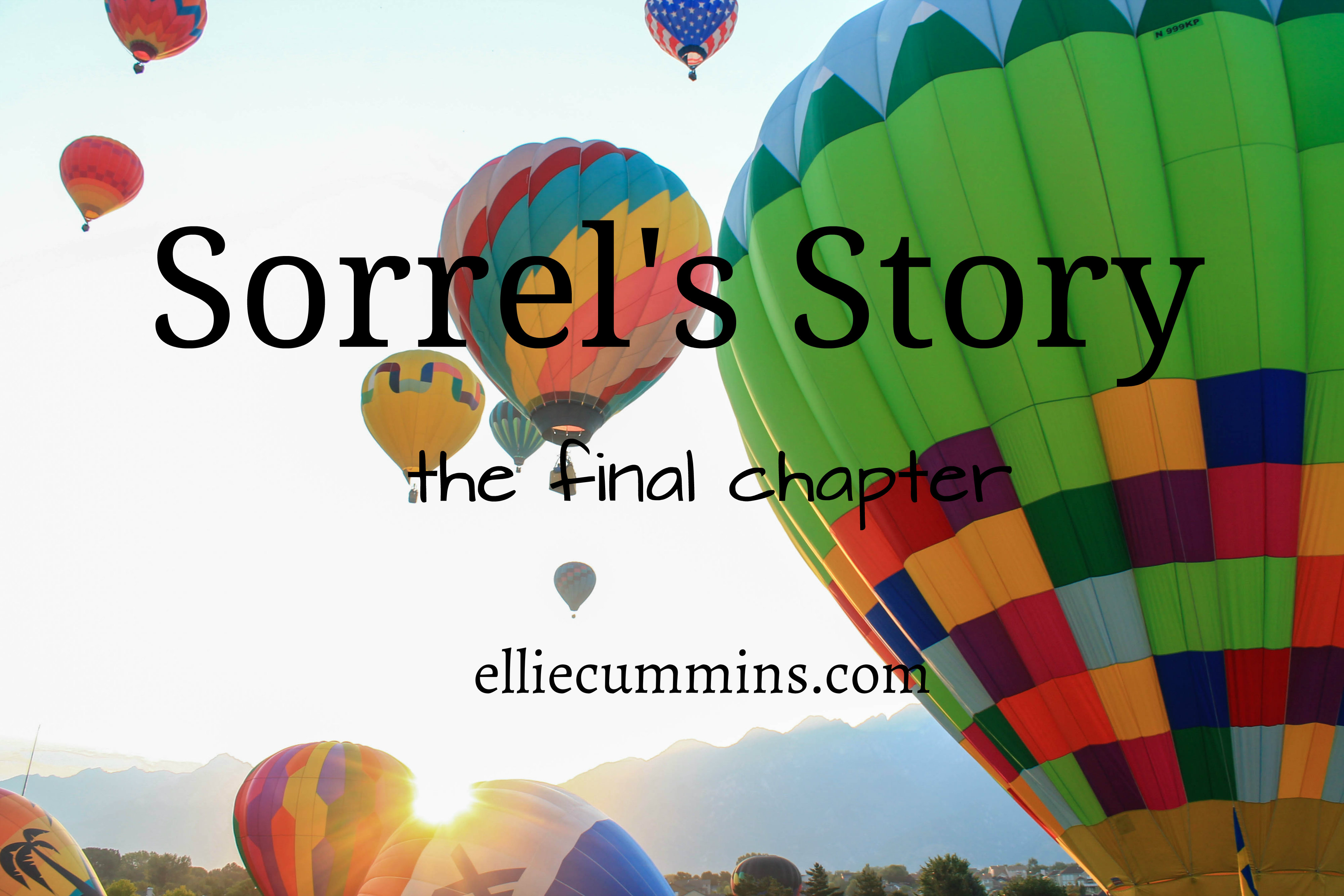 I’m pleased to announce that this is the final chapter of my short story, Sorrel’s Story.

Everyone has been ever so supportive, friendly, and encouraging to me as I’ve posted this story. Thank you 😉

If you’re scratching your head trying to figure out what Sorrel’s Story is, you just might want to click the link below.

Panic seized her. What would she say? Her eyes darted around and she reached out in vain. Nothing offered comfort.

Then she saw Willie. He was taking the stairs in that long gait of his, his face tired, and somehow older.

Sorrel called to him before she could stop herself. His eyes rested on her.

Her heart leapt. His face had an unreadable expression. He began to run. Not away from her, but to her.

He reached the fence. She was staring at him blankly. He stood there, a grin on his face.

“You came back. Why did you stay away so long?” he asked her, but his voice wasn’t accusing. She noticed how weary he looked.

Willie stood there, examining her, trying to put a finger on the difference. His eyes rested on her face. It didn’t look angry. It looked… wistful.

Sorrel swallowed, licking her lips. She began, and faltered.

His full attention was on her. She tried again. “I’m sorry,” she told him in a dry voice. “I was angry at you, and you didn’t do anything.”

He looked at her, his head cocked in that funny way. “What?” he asked her, disbelieving.

“I’m sorry,” she said again, her voice cracking. “I understand if you don’t want to forgive me…” Sorrel turned to go, holding back tears.

“Wait!” he said, and he grabbed her arm through the fence.

“Don’t go! Of course I forgive you. I already had before you left.” Sorrel stopped and turned to him.

“How?” she said vaguely. Dizzily, she looked at him.

“Are you alright?” he asked her, watching her sway.

“Yes,” she answered faintly. And she sat right down in the dirt.

“You want some of my lunch?” he asked her, uneasy.

He handed her a bread roll and a bruised apple. She ate, unaware that she had taken all of his lunch.

They sat in silence. Willie played with a piece of grass, building his courage.

“Are you coming back to the boarding house?” he asked anxiously.

“If I still can,” Sorrel murmured abstractedly.

“Of course you can,” Willie answered quickly. His answer seemed to wake Sorrel from her reverie.

She shook her head, her daze clearing, and let a smile play at her lips. Rising, her heart felt lighter than it had ever felt before.

She looked at Willie, only to find him regarding her.

Suddenly, she felt her cheeks flame and an uncomfortable feeling in her chest.

It was a sensation she had never felt before, and it was strange and unfamiliar.

Sorrel bit her lip, suddenly longing for something to hold.

Her eyes darted around the factory yard.

The littered grass was brown and withered, and the lonely yard had all but emptied of people.

She turned her head away, taking in the busy road, with it’s many faces and bustling figures. She knew no one.

The scraggly trees that had struggled through the packed ground had turned to colors of the earth. Reds and browns and golds waved restlessly in the sunlight.

Endless throngs had crunched the leaves that had fallen, and the cement was scattered with bits of color.

Tilting her head, she studied the sky, with its wispy gray clouds and pale blue shade. The sun glimpsed out from behind a cloud, as if she, too, was shy.

A soft autumn breeze gently fluttered the ruffles of her dress. Her blond hair danced in the wind. But felt as if her heart had stilled. The wind could not reach her fear.

She had tried so many times to hold on. Oh, how it hurt. To be rejected. To find nothing.

Her searching eyes rested on Willie, still regarding her.

Dear, dear Willie. With his forbearance and his forgiveness and his friendly smile.

A sudden realisation pulsed through her.

She closed her eyes, shaking her head in terror. Her heart, which had been hardened for so long, now felt frozen with fear. No, she couldn’t do that. What if she was rejected?

Her mind throbbed with panic, trying to warn her not to get her hopes up. Not to be disappointed again.

Shaking her head, she stepped back, her eyes fixed dumbly on Willie’s face.

She bit her lip, her body moving mindlessly back, away from risk. Away from hurt.

As she did so, his face flickered with anxiousness. His eyes searched hers, confused. “Don’t leave,” he implored helplessly.

Sorrel made up her mind. She would brave the uncertainty. If she was cast aside, then so be it.

Tentatively, she reached out. Her hand reached through the iron fence, past the iron bars.

She closed her eyes, prepared to accept rejection. Her face was tense with the effort of keeping her hopes pushed down.

In that moment, Willie’s hand clasped hers.

All the fear and panic drained out of Sorrel. Her eyes flickered open hesitantly.

They went from her gently held hand to Willie’s face, and back again.

A startled sound escaped her lips. And then a smile. A beautiful, beaming smile.

The factory bell began to ring, it’s shrill voice barely heard. It rang, unheeded, while they stood there, her small hand entwined in his rough one.

The grasp was strong, and safe, and comforting. And the girl was free.

A tear slipped from Sorrel’s eye, glittering as the sun burst through the clouds.

The air was illuminated with sunlight. Still, Sorrel smiled. Her heart beat and her blood pulsed with the feeling of the forgiven.

And for the first time in her life, Sorrel held on.

All That Happened Afterward

Sorrel lived at the boarding house until she was nineteen, cooking and cleaning, and talking to Willie on his lunch breaks.

She visited the Hansoms every week, and the old couple treated her like a daughter.

When she married Willie Oliver, they moved to their own little apartment over the bakery on South Avenue.

They invited Margaret Oliver to live with them, but Margaret preferred to stay on in her little boarding room, sewing and living a quiet life.

Willie continued to work at the factory, and he supported his family honestly. He was drafted in 1917, but came back safely, much to everyone’s relief.

Eventually, the Olivers learned of Sorrel’s inheritance, and they were able to buy a house with room for their four mischievous children.

Sorrel lived a productive life, with Willie by her side. The two of them grew old together, still in love long after their children were grown and gone.

They lived long lives, battling through the rough times and enjoying the peaceful ones. And they all lived “happily ever after.”

That’s it, folks! Sorrel’s Story has come to an end. Thanks for reading! What did you think?